The online literary magazine Switchback has just published Robbi Nester’s review of Breakdown: Banjo Poems. Nester draws attention to the serious play at work in the collection, as well as to the questions it raises about American history and culture.

Even divorced from these racial overtones, it may be hard to take this instrument seriously. We might even agree with Bonta’s playful admonition that “It is better to hear the rebuke of the wise / than for a man to hear the music of banjos” (“Banjo Proverbs”).

As these poems reveal though, if we take this view of the banjo, we have judged the parody without a clear understanding of its source. By discounting this history, we have further undermined the people the minstrel shows sought to mock.

Bonta has made a career of revealing the power of other humble implements in his previous work. For example, his book Odes to Tools, published by Phoenician Press in 2010, the poet considers the hammer, plane, and other instruments of labor in a way that will make it impossible for one to regard them with indifference.

Indeed, to read this writer’s poetry, his blogs, and all the other works of his busy hands is to see the world in an entirely new way.

I am not sure I recognize the fabulous writer Nester is describing here, but this review sure makes me want to make his acquaintance! Gosh. (Read the rest.)

Blogger-poet James Collins has just posted a very favorable review of Breakdown: Banjo Poems at his site Love During Wartime. What’s great about the review for me, however, isn’t so much that Collins liked the book (though that was nice), but that he appears to have read it slowly and deeply. It surely helped that he’s Biblically literate as well as conversant with American history and roots music. It was useful to see my own book through the eyes of such a good reader.

I don’t understand authors who claim they never read their reviews. It’s such a great chance to learn what one’s book was really about — because so often, the author is the last to know. Anyway, check it out.

With the completion of Shackleton’s Banjo last night, I’m up to ten videopoems for one little chapbook, and a couple of questions naturally arise: Why am I doing this? And how many more videos will there be?

I kind of answered the first question in this morning’s post at VN: I’m doing it because it’s fun and exercises a somewhat different set of mental muscles from those used for writing a page-poem. It’s not mainly about promoting the chap, even though they take the form of book trailers — at least for now. Very shortly I’ll begin work on a new incarnation: an amalgam of all the banjo videos so far without my readings in the soundtrack for karaoke-like public performance. I have a reading coming up at Webster’s in State College next week, and I’m planning to project this amalgamated video on a screen behind me while I read. Obviously it would get pretty repetitive to keep mentioning the author and book information before and after each videopoem in a live performance, so the credits will have to be altered, which will entail additional editing as well, I’m sure. So that’s the short-range goal.

In the long term, I would like to explore making a print-on-demand DVD, and I have definite ideas about how I’d do that. But I don’t look at that as a goal per se, because I don’t want to feel pushed to make videos that are less than inspired. I’m pretty pleased with the quality of what I’ve made so far, which I think happened in part because I was just focusing on making one at a time and enjoying the process.

I do have an intermediate goal: a free-to-download audio chapbook of as many tracks as I can produce for the collection. This will be going out under somebody else’s label, and we have a handshake agreement, but I won’t say anything more about that until plans are finalized. I’ve also been uploading some of the audio tracks to SoundCloud. I’m not hugely active there, but I feel that since I’m using the site I should also be giving back.

As for the presentation of the online videos, I continue to update my Videos page here, and have also just added links to the process notes about each video (including the Swoon videopoems) to make the page more useful. They are also grouped together into a YouTube playlist and a Vimeo album. And they’re all included in the Breakdown series at Via Negativa, which at some point I’ll reorganize so videos follow the texts that prompted them.

I’ve been remiss in not following up my previous post to announce that Breakdown is indeed out and available for order ($9.00) from Seven Kitchens Press. I’m very pleased with the cover art by Steven Sherrill, whose full-color paintings of off-color subjects keep company with an eclectic assortment of instruments, homemade and otherwise, in his basement. Inspired in part by the lovely book design, the work of publisher Ron Mohring, and in part by the enthusiasm of Steve and other banjo-playing friends, I’m forging ahead with making videopoems for the book, using banjo-accompanied readings for the soundtracks, which may eventually become an album of sorts. But for now, there’s just the growing album of videos. As I said in a recent blog post about one of them, my thinking about these audiopoems and videopoems is that they don’t necessarily drive more sales of the chapbook; if that were my primary reason for making them, I suspect I’d be disappointed. They’re just fun to make, and the publication of the book provides a handy pretext for spending many enjoyable hours exploring SoundCloud and archive.org. Plus, they will give me something else to do during a live reading besides just read from a podium. I do have this notion that audiences at poetry readings deserve first and foremost to be entertained.

And speaking of readings, I’m honored to be kicking off a new, monthly poetry reading series at Webster’s Bookstore Cafe in State College, Pennsylvania on November 6. (See their Events page for details.) 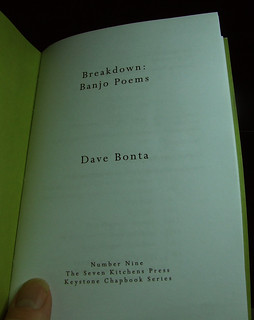 This is the uncorrected author proof for my poetry chapbook Breakdown: Banjo Poems, due out soon from Seven Kitchens Press. That was the manuscript I sent off to the Keystone Chapbook Prize in 2011 on a whim, thinking the press could use a donation (my entry fee). Imagine my surprise when mine was one of the two winners that year, selected by Sascha Feinstein. Oops! Well, what can I say — I still think it’s a fun collection, and there are several poems in it which I am very proud to have written. More than that, I couldn’t be happier with Ron Mohring’s design and font choice. I haven’t seen the final cover yet, but I’m really looking forward to it, since it will feature a painting by my friend Steven Sherrill, who is a terrific novelist and poet — not to mention a banjo player.

Breakdown has been a little late in coming, but as Ron says on the website, “We truly appreciate everyone’s patience and good wishes as we relocated—and rebooted—the press.” Stay tuned. I think it will prove to be well worth the wait.

I'm the author of several books, including Ice Mountain: An Elegy, Breakdown: Banjo Poems, Words on the Street: An Inaction Comic, and Odes to Tools, but my real work is at my literary blog Via Negativa. I'm the editor and publisher of Moving Poems, a webzine showcasing the best poetry videos on the web. More...

Find me on social media

Latest posts at Via Negativa

All writings by Dave Bonta are licensed under a Creative Commons Attribution-ShareAlike 4.0 International License. For attribution, my name will suffice. Contact me for permission to waive the "share alike" provision (e.g. for use in a conventionally copyrighted work).